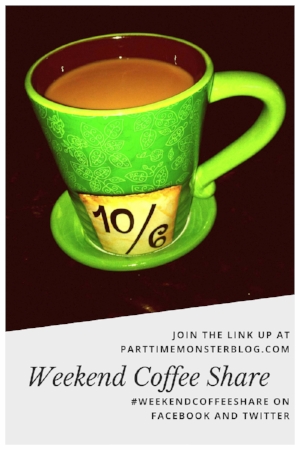 If we were having coffee, I’d ask you kindly to ignore the dishes in the sink and the counter – don’t worry, there’s a clean cup for you – and the laundry on the table that the mostly-grown but still incorrigibly kittenish young feline is using for her bed. On that note, it’s pretty likely that you’ll end up kicking one of her cat toys – Legos, socks, Ace bandages and Matchbox cars – okay, pretty much anything she can carry in her mouth, kick across the floor, pounce on, and roll around with it ensnared in her deadly predator’s embrace…

But, cute and entertaining as Miss Amelia Rose (Ammy, to her twelve year old pet human and everyone else around here) is, she isn’t the reason I’m pretty psyched. Neither is this homemade bread, but I’m going to offer you some, and your choice of a variety of toppings (I like whipped butter; I’m a simple kind of soul when it comes to tastes).

So, if it’s not the cat or the buttered bread….what is it?

I’m pretty happy that you asked, because everyone here is asleep, so shouting my good news as I skip through the house would not only look ridiculous and probably end in me falling over a kitten toy, but would also net me three very unhappy human housemates….

So, maybe it’s a pretty good idea that I tell you, instead, where I can let my fingers do the talking (and, if you get that reference, I’ve just dated myself, but I don’t care).

What’s all this fuss about?

Anyone who reads here often probably knows that I write a lot of Star Trek fan fiction. I kind of have to – I live with two Vulcans and their supporting cast in my head, and Vulcans aren’t exactly shy about telling it like it is. Matter of fact, one of these two has woken me up at night to tell me parts of her life story that made me cry – and I’m pretty sure she did that so SHE wouldn’t!

So, I wrote this mini-arc of three stories, in September of 2015, as part of the Story A Day September Challenge. I really liked all three of them, which deal with what I perceive as “blank spaces” in the Star Trek: Enterprise episode “Daedalus”, and also give some explanations for what seems like a colossal Vulcan brush-off without messing with canon.

I found the first part, “Lost, Found, Lost”, and the second, “We’d Better Hurry”. But the third part, which really packed a punch on all kinds of levels and provides an answer Trip can’t understand to the question T’Pol can’t – that one was lost.

Not a little lost, or pretty lost.

I couldn’t remember what I named it, so I couldn’t search for it by that. I’ve looked and looked and…

I’d been organizing some file directories, and accidentally recycled a folder I need. I went searching for it in the Recycle Bin, and that’s when it hit me that, I could search for it using keywords (sometimes things take a long time to occur to me). So…that’s what I did. First, I searched up “IDIC”, because my Trip and T’Pol story world is titled The IDIC Romance, which is pretty self-explanatory if you know Trek, and pretty irrelevant if you don’t.

The point is, the story wasn’t there…and then, I had a pretty amazing flash of inspiration, and my next search was:

(Standard disclaimer applies; not my characters, and this is for love, not money):

“He didn’t need to ask to know what she was reading, or that it had something to do with her mother’s death. Her mom had wanted her to read the Kir’shara, and T’Pol was damned well going to read it.”

I found it – and a sequel! I’m pretty psyched!

And it’s perfectly okay to look at me like I’m a madwoman. I pretty much expect that…

Yes, I see that you’re nodding and backing away slowly (unless you’re One of Us, in which case you’re probably pretty bummed there isn’t more to that story, so here’s a link to my online fan fiction – you’re welcome!).

Wasn’t that bread tasty? I’m glad you stopped by…now maybe I can contain myself until my family is awake to nod tolerantly at my news! They’re pretty used to me, after all!

Please watch out for rogue kitten toys as you’re backing away!

This post is part of #WeekendCoffeeShare. Come join us for a cuppa at Part Time Monster Blog! Linda G.Hill’s Stream of Consciousness Saturday -an unedited stream of consciousness piece that ties into the weekly prompt: ‘pretty,’ used any way you (pretty) please. If you enjoyed this dip into the Stream of Consciousness waters,come join in – there’s plenty of room, and just a few simple rules. 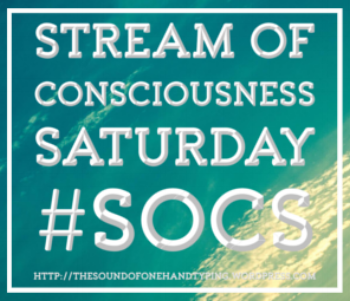