“Maybe We Need This”: The IDIC Romance for #JusJoJan Day 21

Welcome to Day Twenty-One of Just Jot it January, where, for a month – well, we jot. Whatever. However. Wherever. Whyever. It’s graciously hosted by Linda G.Hill.

Today’s prompt, “Mittens”comes to us courtesy of Candy at Rhymes With Bug .

Today’s post is the latest episode of my December story, “Animals”, all of which has appeared here. At the end of the story, I’ll post links to the other segments.

And, as always, I don’t own them; they’ve just got a direct link to my imagination. I write their stories for passion, not profit.

“Maybe We Need This”

“That is hardly an answer.” Had she intended to direct her frustration at her bondmate?

“Don’t worry about it, pepperpot,” he whispered into her ear, his cool breath shivering and shuddering through her. It was perhaps even more frustrating that, while she remained as blind to his mind as she was to the room surrounding her, his ability to sense her had, if anything, intensified. “Do you want to find out what I mean by Schrodinger’s basket?” Before she could answer, he said, “OK, silly question. Of course you do. Here, let me help.”

He took her hands in his own, very gently, brushing the backs of her fingers. She wanted him to touch her fingertips, to feel his unique bioelectric pulses. Without them, without his mind sensed twining with her own, without their child growing in her womb or at her breast –

A strong arm around her, squeezing her firmly. “I’m still right here, T’Pol. What’s in the basket – I think maybe we need this -so, when you’re ready -” A tear fell onto her hand; she had shed no tears, not for Grace. Not for them. It was as though she were locked tight around the grief, the shock of waking from coma to find their daughter delivered, and already dead, while she was unconscious.

Was it logical that she still couldn’t accept that Grace wasn’t kicking and rolling, her small fist finding that precise place against her rib that elicited a sharp stab of discomfort – discomfort she illogically held to, as a sign of health and vitality that matched her father’s?

“Not in the least, Trip.” She would be honest with her t’hy’la. There was little else she could offer him.

Another small sound emerged from the basket on her lap, and, this time, an almost imperceptible movement accompanied it. T’Pol drew a deep breath. “Kaiidth. What is, is. I’m ready to learn what Schrodinger’s basket contains.”

He guided her hands down the handle of the basket, then into the bowl, where a nest of soft cloth waited. “Nice and gentle, now….”

“Kittens,” Trip told her. “No more than a week old, and orphaned.”

“We found them in the old shed,” Kath Tucker added. “We don’t know where their mother is, but they were going to starve to death.” T’Pol felt the way the ribs were plainly defined, and thought that Trip’s mother was correct.

“They need care, immediately,” she said. “Nourishment, warmth, and comfort. Closeness to serve as proxy for their mother.” She considered what she knew of Terran felinoids. “Cats see to matters of hygiene without assistance, if I’m not mistaken.”

“Not at this age,” Trip said. “They’re too small; their eyes aren’t even open yet – they can’t see any more than you can, right now. Mama would be doing that for them, if she was around.”

“May I help tend them? I know little of Earth felines, but, if you’ll assist me, Trip -”

“I was hoping you’d want to,” Trip said, and she didn’t need to see him or feel his mind to know that he was smiling at her through his tears. “But I didn’t want to push you.”

“It seems logical, Trip. We’ve lost a daughter; they’ve lost their mother. I will need assistance, and information in a form I can currently disseminate -”

“Ah, Commander T’Pol. It’s encouraging to see you returning to your customary efficiency. I’ve taken the liberty of adapting a formula designed specifically to meet the kittens’ nutritional needs.”

“And I’ve got a comprehensive file on kitten care, translated to Vulcan and recorded with your auditory preferences in mind,” Hoshi said, from the corner of the room.

“And I’m right here, to help be your eyes and hands, pepperpot.”

T’Pol allowed her fingers to drift along until she determined the dimensions of the kittens’ bodies, and the safest way to pick them up before she addressed her mate’s growing restlessness. “It is less than comfortable to rest against you when you’re attempting not to say something, t’hy’la. I’d find it more agreeable if you shared it.”

“I don’t want you to feel obligated -”

“Trip.” She made no effort to restrain her frustration.

“Well, Cap’n Archer says that we can keep them. If you want to, that is.”

T’Pol lifted the small creatures to her chest and cradled them there. “It is perhaps illogical to discuss this while they are hungry.”

Half an hour later, the kittens were both fed and asleep upon her chest,their tiny bodies vibrating in an involuntary sound known as ‘purring’; she had no desire to return them to the basket, where they could neither derive comfort from her, or she from them. “I would like to keep them,” she said quietly; their ears were as sensitive as hers.

Trip’s pleasure was evident in his voice, and the sudden relaxation in his body and scent. ‘What should we name them? The smaller one has four white paws – maybe Mittens?”

T’Pol chose not to tell him that the practice of giving a name to a creature that was notably unlikely to respond to it was highly illogical.

Now, as promised, here are the other episodes in this serialized story, in chronological order: 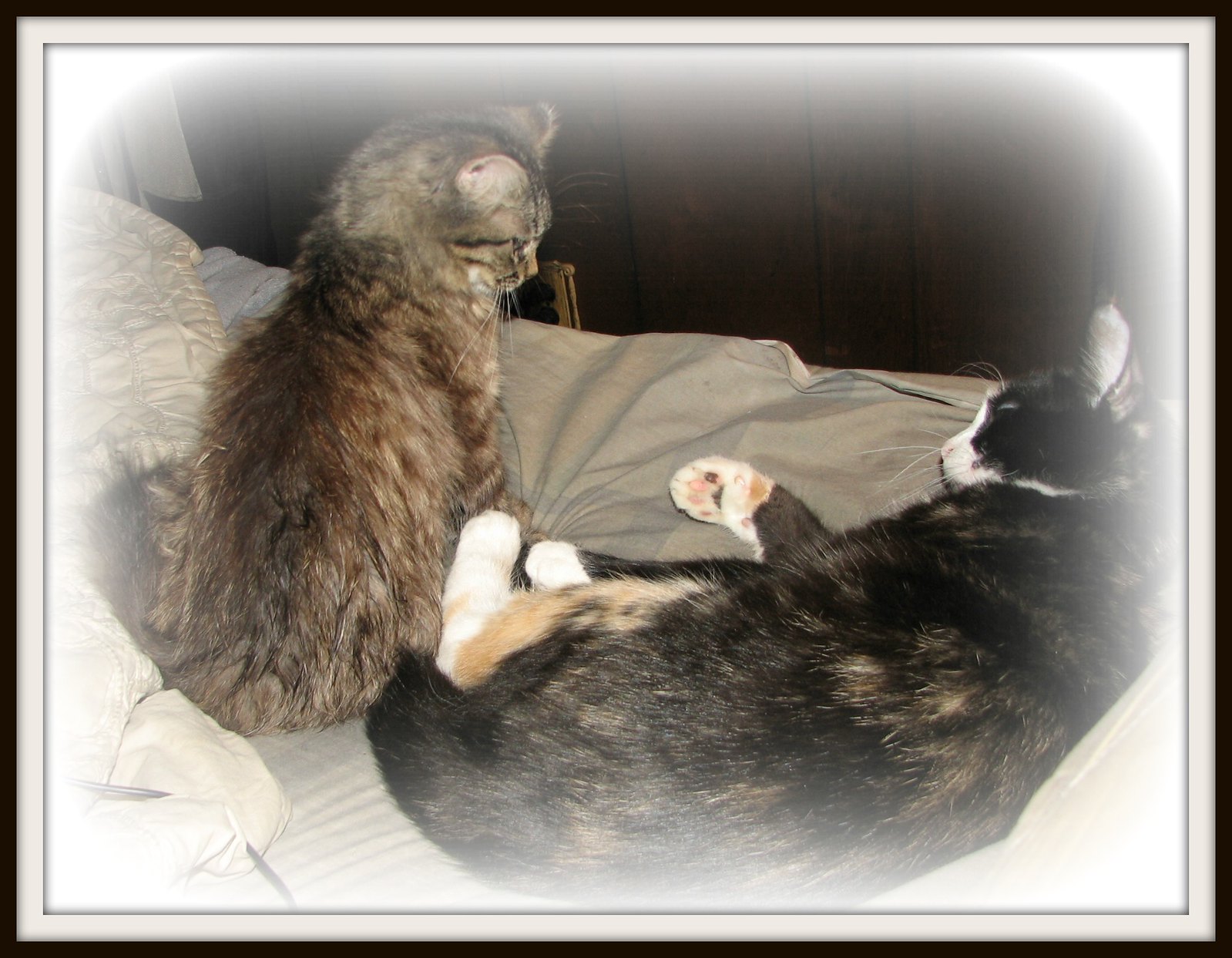