This post is part of Linda G.Hill’s Stream of Consciousness Saturday meme – an unedited stream of consciousness piece that ties into the weekly prompt:“compliment/complement”.  I used both.

This story, abridged here, was written for Story A Day May , – I like combining complementary challenges. I also used “cucumber” – a prompt from a fellow WIPpeteer, and the full version includes a William Blake quote….yup, four challenges in one little story! I’ve deleted passages to make it fit here, but it’s otherwise unedited.

This story is a fan fiction extrapolation of an unwritten follow -up scene based upon the Star Trek: Enterprise episode S4 E3 Home. Trip has returned home following T’Pol’s wedding, and is dealing with the implications…

Disclaimer: T’Pol and Trip are property of Paramount; no copyright infringement is intended. 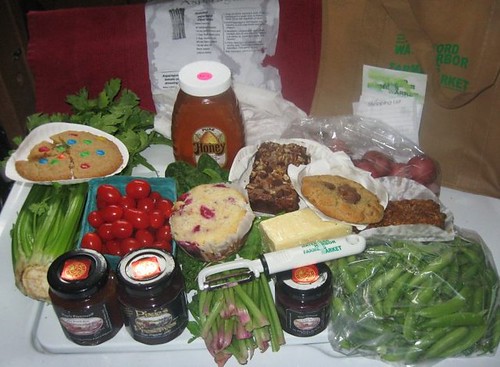 “I think a cucumber would be the perfect complement for this veggie platter.” Kathleen Tucker didn’t look at her son. Whatever was eating at Trip was going to burst out any minute now; he hadn’t taken his tongue out of his cheek for the last five minutes, and his breath was coming out in little sharp puffs, the way it had when he was a toddler.

Trip went to the stasis unit without a word, but then stood there with a knife dangling in one hand, and the other on the handle. “When’s the last time this was serviced, Mom?”

Kathleen laughed. “Serviced? Trip, it’s brand new, like everything else in this house. And you’re not – I repeat, not – going to take out your frustrations on my kitchen. That’s an order, son.”

“Who says I’m frustrated? Just restless, is all.”

Trip brought out the cucumbers. “Never saw anyone who loved these things as much as she does – not that she’d be caught dead admitting to loving anything…”

Here it comes…Kathleen prepared herself for the onslaught…when Trip had been holding something in, it always poured out of him like a tidal wave, rising and rising until there was nothing left to pour out…

But he just stood there staring at the two cucumbers, as though he’d forgotten everything else. She stared at the bubbling water, and moved the eggs around in the kettle, even though there was no good reason to do so.

“Let me drain that for you.”

“No!” His voice cracked, and the kettle clanged against the porcelain sink. “Damn – I chipped it. Sorry, Mom – but please don’t. I want to cut it.”

“This place was too new – it needs a little Tripification.” She reached up to wrap an arm around his shoulder, noticing how hard and tense he was. He’d always taken care of himself – but this was different. Almost like what she imagined the inflexibility of a soldier would be.

What the hell had happened to him out there? What had he sacrificed?

She felt a tiny hiccup go through him – and she knew. That was a tell he’d had all his life. Kathleen thought of what he’d said about the cucumbers. This was a woman he’d lost, then.

Trip shrugged out from under her arm even while he wrapped his around her waist and gave her a squeeze. “Well, consider it Tripified, Mom – and the eggs drained. I’m going to get on that cucumber now.”

The knife clattered to the floor as Trip jumped back, swearing in a way that would’ve embarrassed him, once, his face white as he clutched his left hand with his right, blood dripping down too fast for this to be a minor cut.

“Let me see.” She took his hands and led him back to the sink, his blood falling on the eggs, vividly red against the white. There was a long gash across his palm, and it was deep – but clean. She yanked open the cloth drawer and bound it. “You hold that while I get the first aid kit out of the cupboard.”

Trip stopped swearing, but he was still grunting in pain. “You’d make a helluva engineer, Mom.”

“Is that the best compliment you know how to give a woman, son?” She came back with the kit to find him already poking at the wound, the rag dripping uselessly. “I told you to put pressure on it.”

“I never was very good at listening to directions I didn’t like.” A small, wincing shrug. “And maybe I’m just outta practice. There’s no logic whatsoever in complimenting a Vulcan – as she’d be the first to tell me, if I dared to try – “ He cut himself off, biting his lip.

Kathleen took hold of his hand again, relieved to see that it wasn’t quite as deep as she’d thought – the knitter would be enough. “This will only take a few minutes if you behave yourself and hold still.”

Surprisingly, he cracked a grin that turned into a grimace as she positioned the wounded hand. “Ouch – I never realized how much she sounds like you, sometimes. Wonder if that has something to do with how I feel about her – hell – Mom, how the hell do I stop thinking about that damned infuriating woman?”

“Hold still, Trip, or you’re going to make this worse. Blood all over my kitchen isn’t my idea of Tripification. Scuff things up, take them apart, upgrade them, chip or scratch them – but no one’s going to want to eat here if it looks like I massacred my son in here.”

Will Trip hold still? Will he forget about T’Pol? Will I manage a story a day all month?

We’ll have to see.

I know – this song isn’t a perfect fit-  but it’s a sweet childhood memory for me, and I think it captures the mood of the Tucker kitchen in happier times…plus, really cute kids!