Ever watch a tadpole become a frog? Ever face one of those weeks where there’s a LOT going on, and you’re a little tired just thinking about it all?

No, one thing doesn’t necessarily have anything to do with the other. I’m a bit kid-rich and coffee-deficient at the moment, and I’ve already been regaled with stories of the creation of Five Nights at Freddy’s, and sat on by a cat. So, it’s just possible that I’m a little loopy…

Anyway, there is a newly metamorphosed frog here amongst our menagerie. A few weeks back, in the summer, Annalise brought in some tadpoles she found in her neglected sandbox. Attrition occurred, until only one was left…but that turned out well, because about three weeks ago, she noticed that PomPom (yes, obviously, a tadpole needs a name!) was growing legs. We’ve had tadpoes before, but never gotten to that point, so it was big news.

And those back legs kept growing, until they looked like tiny, translucent frog legs! Then there were front legs, and she (gender determined by Annalise; not necessarily accurate) started kicking…

And then, three days ago, Lise came to me, distraught. Her tadpole was not in her little plastic bin!

She was sure the cat had eaten her. Squeak cat-egorically denied those allegations…

I looked, and found a tiny little froglet hiding behind the tank, looking mightily confused. I wasn’t sure she hadn’t dried up, but, when I put a bit of paper down near her, she hopped right on, and then back into her tank – and Lise got the frog habitat set up.

So, now we have a little frog. Today, her tail has been absorbed, and she hops and hangs on the walls of her home, and she’s growing.

I think that’s pretty amazing, even if it’s just what frogs do.

Like I said, it’s shaping up to be a busy week. Tomorrow, I get my tooth extracted – no more absecesses from that, thank you! Tuesday, I’ll take Annalise shopping for costume elements. Wednesday will be a preparation day, and Thursday, the kids and I will make our traditional five-hour drive to spend Halloween with their best friends in central New Jersey. Friday is Halloween, and the final day of the month, and OctPoWriMo, and Saturday, in addition to the five-hour drive home, is the kickoff of NaNoWriMo.

By Sunday, I’ll be ready for a day of rest – but there’ll probably be unpacking and laundry, instead! =) I’ll also be posting my end-of-month evaluation, and updated November goals (hint; NaNo!).

And now, onto this week’s update! 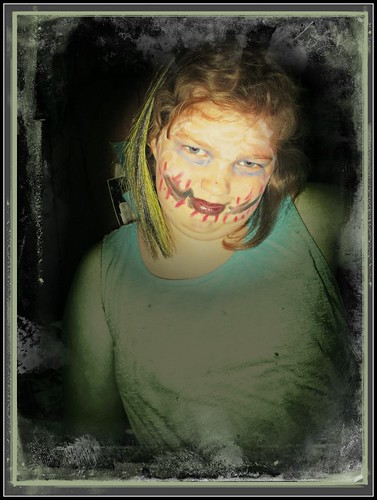 Queue all November posts for Coffee and Conversation and WIPpet Wednesday features by October 31. On target.

Blog all 31 OctPoWriMo poems. On target.

Finish plotting The Earth Doth Move (for NaNoWriMo 2014) by October 31. On target.

Eat fresh vegetables other than salads (raw or cooked), and/or fresh fruits at least 3 times each week. Not so much. I kept meaning to, but didn’t.

ROW off to visit some more ROW80 updates!