Coffee and Conversation: The Gift of Grief

Grab a cuppa and a comfy seat, and let’s chat a while.

Are there times of year that you find emotionally charged? Where your feelings are tumultuous and close to the surface? Where small things can lead to huge inner shifts?

As I mentioned in my posts throughout this past week, July is an emotionally complicated month for me – turbulent, surging up in joy, plunging into sorrow, lifting again…

Earlier in the month, my daughter celebrated her birthday. She was born in July of 2004.

July of 2003 was a very different matter.

After a textbook pregnancy, our secondborn, Elijah James, decided it was time to be born, four days before his due date. Things didn’t go as expected. Eventually, forceps were used – and our baby boy, healthy only a few minutes before, was born not breathing.

Things got a little blurry for me, after that. My blood pressure tends to be low; it dropped precipitously. I remember asking the nurses what was wrong with my baby, and the nurse answering, “He’s fine, he’s fine,” as I watched them attempting to resuscitate him.

After what seemed an eternity, they got enough response to whisk him away and intubate him – I’m not sure about the order of those events, only that both happened in the four hours I spent recovering before the maternity staff allowed me to use a wheelchair to go to the NICU.

My husband went to be with the baby, and my emotionally volatile mother stayed with me. She had been with us through Elijah’s birth, and I know she was feeling protective and helpless – but she became embroiled in a power struggle with my nurse, and the conflict had me trying to play diplomat, and feeling not only raw and terrified, but also like I was the non-sentient tug of war rope in their battle of wills. All I wanted was to see my baby, and for him to be okay.

I am lucky. Elijah was awake when I met him; we regarded each other. I wrote about that meeting in my poem, “Soul to Soul”. Here’s an excerpt… 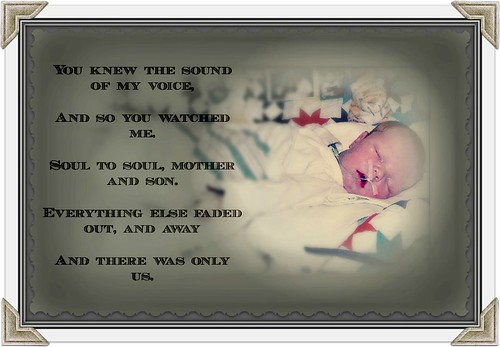 I’ve learned not to try to hold a balance during this month. I live a life that is peaceful, chaotic, often laughter-filled, inspiring, sometimes frustrating. I have a tremendous deal to be thankful for. I have a marriage that survived a loss that 85% of marriages don’t, and that has grown stronger, deeper, and richer. I have two living children, and they are happy, strong, curious, kind, affectionate, bright, funny, confident, independent, and many other wonderful things – the chiefest among them being that magical word – LIVING!

I have a child who lived and died in less than two weeks. He never cried, never nursed. I never held him without tubes and sensors attached to him.

His death is the most shattering thing I have ever known. And it was the catalyst for deep healing. His donated heart valves made a little girl’s life easier. His brief life made me take a long hard look at the way I was raised, and what I wanted for my own children, my marriage, and, maybe most importantly, for myself. It led me to make massive changes, as a mother, and as a human being. He is my most precious and painful gift.

I don’t know how to balance between the extremes of this month. Instead, I go for blendings- allowing the emotions and memories to weave in and around and through the life I live now, the love I share, not only with those who are here, but also for the small life so quickly ended, and whose presence has been a part of me, ever since…

It’s July 14, 2014. I’m home alone, remembering, writing, hometending, and planning a weekend camping trip. Life goes on, and I remember, and make memories, all at once…

I ask you to take a few moments, today, to look at your life, at your loves. What would life be like without them? How can you show them how very cherished they are? How can you do that for yourself? Most importantly, what are you waiting for? I’ve got a fresh cuppa something hot and sweet. Won’t you drop by and chat a bit?