Coffee and Conversation: Who Mowed the Lawn, and Why?

Grab a cuppa and a co

mfy seat, and let’s chat a while.

I wanted to know what those lives were, and to share my own…

I know, it’s a day late for a Coffee and Conversation post. I’ve been rather lost in my Story A Day May Challenge, and I just didn’t get to this yesterday. So here it is, belated, but heartfelt…

On Sunday, my 12 year old son mowed the yard.

My guess is that he was far from the only boy in America that could be said of, on any given spring weekend when the weather is cooperative. It seems to be a traditional chore given to boys large enough to handle some adult jobs, but who haven’t yet reached their full strength, growth, or perhaps ability to resist…

Because, on a fine spring weekend at the end of a long winter, and approaching the end of a long school year, it’s conceivable that a boy might begrudge that time spent on lawn work; that he might have some other idea of how to spend those few precious hours of freedom…

But, because kids must learn responsibility, and chores are a means to that end that also shifts some of the burden of yard maintenance from adult shoulders, the boys (and, I imagine, in our current climate, some girls as well) are sent out to mow.

But that’s not how things are, at our house, and not at all why Jeremiah was mowing the yard this weekend.

As I’ve mentioned before, we don’t assign chores in our home. Both my husband and I grew up with gender-specific chores, and neither of us felt that these helped us to learn responsibility as much as they built resentments at the unwanted workload, the time away from the things that fired our passions and spoke deeply to us…

Chores stole from my life, far more than they added to it. That isn’t to say that I begrudged my family my help – only to say what I suspect is true of most people, whether children or adults. 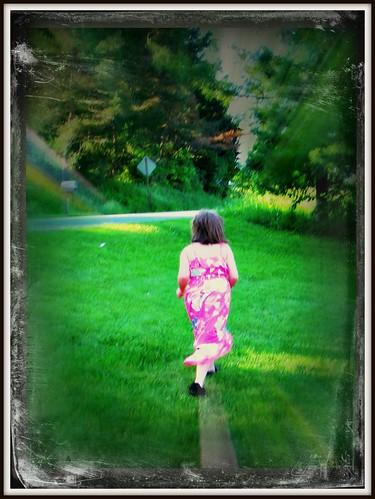 I wanted to choose the ways in which I helped, to give my help freely, and to have it appreciated without being judged.

There were things I did happily, without being asked. Yard work was one. None of my three siblings seemed to enjoy it as I did, and so, more often than not, I would do it alone. In the house I grew up in, alone was a rare and treasured state. Alone meant that the stories playing out in my head, the deep thoughts waiting to be explored, at last had a little space, a time to unfurl without interruption. The repetitive motions of raking or weeding provided a rhythm, and there was pleasure in both the physical exertion and the creative introspection.

Chores, though, were assigned labor. In our family, there was no thought given to whether the chore suited my nature and talents; I was expected to do as I was told. And, to me, that seems unfair to a child. Children are already smaller, more dependent, less powerful, and too often disenfranchised.

And so our children help when and as they choose.

And, on Sunday, after both my husband and I had mowed portions of our steeply sloping yard, and after hinting a time or two that he might, Jeremiah asked if I minded if he did some mowing.

He mowed for hours. When the mower clogged, he turned it off and cleared the blockage – safely. When he ran out of gas, he told me, and I showed him how to refill it. When he got tired, he took a break.

After, as I looked out upon a sweeping expanse of freshly mowed and fragrant grass, I asked him what he’d been thinking while he mowed. He said he’d been thinking of stories he’s read, and ones he’s been attempting to write for the last few months.

He enjoyed the mowing so much, he said he needed to find a way to pay people to let him mow their yards. When I told him people might willingly pay him to mow for them, his grin took over his face (he likes earning money!).

Today, he went to work at his grandparents’ house, and learned how to drive a lawn tractor.

Will he mow again, with the same enthusiasm? Maybe – or maybe not.

But I’m pretty sure that he wouldn’t have quite the same joy in it, if we assigned it as his chore.

I like it this way. The lawn looks lovely, and, rather than a grumbling child who feels his life is being measured out for him, there’s a boy here who’s gained some confidence in his own strength and abilities, and had all the time he wanted to think big thoughts while the rest of the world was shut out by the sound of the motor. He’s accomplished something useful and easily quantified, and fulfilled deeply personal creative impulses. He’s helped his family, and himself, just because he wanted to.

And I’m not the only one smiling about that!

How about you? Did you have chores? Assign them? What did you love, or hate, to do as a child? Is there some “chore” you still love today? Have a cuppa, and tell me all about it!