Blogging from A-Z: X is for Xavier (Kifo Island Chronicles)

Xavier kicked hard at the foot of the easel, sending it clattering to the clay tiles. A muffled thud from the canvas; the paint sprayed and spattered.

“I’ve forbidden you to paint!”

“You’ve forbidden?” It was a mocking echo. Her heavy-lidded eyes focused on him, ignoring the mess. Xavier kicked at it again, and paint smeared beneath his shoe, nearly tripping him.

“I have.” Xavier was determined to hold to his dignity, although the paint had splashed his face.

“D’accord. You forbid it, so I will not paint – not while you live. After, what I do won’t be any concern of yours, n’est-ce que pas?” She laughed with a merriness he’d thought he had long since thrashed out of her. 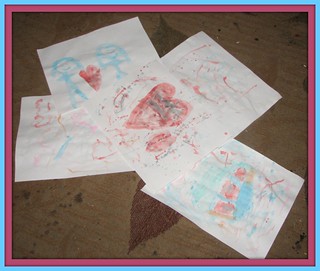 Fury rose fever-hot, bringing an itching to his ears and palms. He clenched his fists, rage growing, swelling, bursting forth. He didn’t know he’d crossed the floor until the first punch landed with a sweet jolt of impact. He wanted to laugh, but he rained blows instead, delighting in the solid strikes as she raised her arms with a cry; and he loved the feel when he connected with the soft firmness of her breasts or buttocks –

She brought her legs up to her chest; she was panting and grunting, but she didn’t cry out, and Xavier determined that he would not stop until she did –

She launched both feet at once. Xavier went down hard, retching, and it was he who was crying.

“You will not hit me again.” She was standing over him as he curled around his pain, his emasculation. “Jamais!” She spat at him, and a cruel smile twisted her mouth. She left the room, her strides smooth, the door clicking softly, as though there had been no trouble between them.

Xavier groaned, rolling in the paint and pain and mess he’d created.

Want to learn more about the Kifo Island Chronicles?